the bus fair is unpaid. 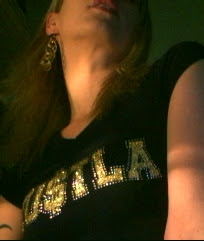 We were supposed to have some crazy insane white boy rappers last night and it was going to be all off the hook and crackery and we were going to have a race war and some fights and hopefully someone would maybe even get shot and I was going to make 8 million dollars because I am a HU$TLA, see.

New boy was working with me so I made him my bitch because I quite obviously deal with change really well. So every time the phone rang I made him rock paper sissors me for who had to answer it except instead of doing rock or paper or sissors or whatever I would just point at him and be all like AHEM THE PHONE IS RINGING THATS YOU. He was in the special forces and all but that military shit does not hold a candle to my overbearing tyrannical behavior coupled with my incessant mockery.

I am 105 pounds of pure intimidation.

But having another guy to do my work was a little awesome because I had plenty of time to be harassed by customers and stuff which is a totally supreme privelege of my job. Like some guy who is apparently the CEO of the record company or something was spending tons of money on drinks and flirting with me and shit but he was only tipping me a dollar a round. 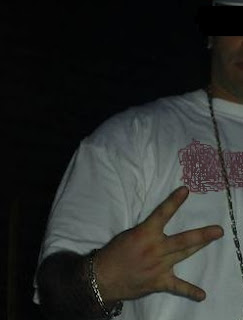 At the end of the night I let him buy me a drink because like come on if your not going to give me any money I will at least take a free drink. shit. Ok I’m a whore. but whatever. Then he wanted me to take him out to dinner and I was like UM NO. if I were to ever eat with you under any circumstances I guarantee that YOU would be paying. Apparently he thought he had tipped me enough to buy him a meal…..

HE PREPAID OUR DATE. I’m sorry, he prepaid our McDate. What a nice McGuy. Kiss my McAss. So then I looked up his McMyspace and he is like doing that retarded WESTSIDE symbol in every picture because he is gangsta. A big fat white gangsta.

So anyway my night was some huge disappointment because we didn’t have the race war or the fights and no one even got shot. GET THE FUCK OUT OF MY BAR RIGHT NOW YOU FUCKING POSERS.

Then I watched a crack deal happen in the parking lot and then the barback made the promoter cry and then my fucking head exploded because seriously dude you weigh 230 goddamned pounds and the fucking barback made you cry. Excuse me while I bang my head against this bar AAAAAAAHHHHHHHHHHHHHHHH

Also the minimum wage in the state of Nevada went up but my paycheck did not. Hooray for slave labor, homies. We are organizing a Christmas Eve boycott so looking forward to that.

This has been a post from my former blog from when I was cooler. Or at least when I was younger Viva La Crap!

They might take every last one of our rights, but no one can say we didn't get some good quips in

Removing the Gettysburg Address because a “nation conceived in liberty” just seems patronizing at this point.