i too sing my way out of wacky situations. 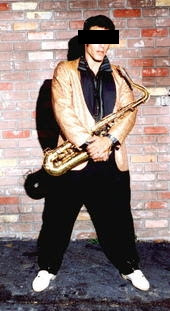 The boss is gone now for vacation and he left the former manager in charge Captain Stinky Mouth. We call him that because it smells like a rat died in his mouth and he likes to breath on you all the time so we were going to buy him a tic tac gift basket for Christmas. Or trick him into drinking a glass of bleach.

Also the Captain wears pink 50’s style bowling shirts and drives a purple Chrysler PT Cruiser but he IS NOT gay because we have caught him having late night skank-booty calls inside the bar. Oh yeah and also he is married. Um. to a girl.

And if we ever say anything to him about how he is wearing some pink bowling shirt and he should take it off because he looks like he might be downs syndrome then he looks at you like you are stupid because he thinks he is a creative person and therefore allowed to be all weird and creepy. I guess if you are some awesome artist you can totally do what you want but if you just make shitty low budget porn that does not qualify as art so you should just wear shit from Abercrombie or whatever like everyone else.

“The misadventures of four crazy and fun loving guys from a New York City neighborhood during the early rock and roll era who sing their way out of wacky situations.”

gonorrhea IN HIS MOUTH.

Um. I think we need to start a rivalry with the bar employees down the street or something because we are getting way too bored since it took us 3 hours last night to break the bar down all so that we could mildly annoy Captain Stinky Mouth. Perhaps this is a little unhealthy or something.

They might take every last one of our rights, but no one can say we didn't get some good quips in

Removing the Gettysburg Address because a “nation conceived in liberty” just seems patronizing at this point.